As its name suggests, Dynamic Homes of Detroit Lakes, Minn., isn’t hung up on the status quo.

Its willingness to experiment with better ways to build was on display in last year’s construction of an apartment building in Lindstrom, Minn. Dynamic Homes used modular construction to build the three-story, 77,000-square-foot, 84-unit Olinda Trail Apartments. That meant building 90 modules in a Dynamic Homes production facility, trucking them to the site and assembling them there with a crane. 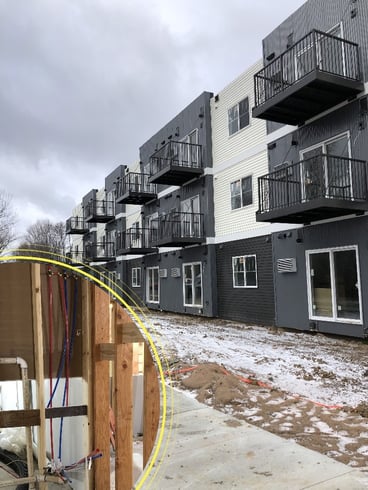 Dynamic used Viega PureFlow PEX to complete the plumbing in each unit in its factory and stubbed it into the hallways for easy onsite connection to the mains. Plumbing each modular unit with PureFlow took 8 to 10 man-hours, half the time it would have taken using copper and traditional joining methods. And connecting each unit to the hallway mains took only one hour.

By contrast, traditional on-site construction meant the builder would have had to leave plumbing in the units unfinished, which would have required more work on-site and increased the risk that the units would be damaged during that work.

“This is the first time we used PEX in a modular project,” said Dynamic Homes Operations Support Manager Jim Cossette. “By doing the work in-house we could work faster and avoided weather-related delays.”

The entire project took 56 days in the production facility and only seven days on-site, a ratio which allowed greater control of costs.

PureFlow PEX was more efficient than hard plastic or copper because it is easier to run the lines through web joists and walls to create connection points in the hallway. The plumbing contractor also saved time and labor by using Viega ProPress® fittings for water heaters and MegaPress®G fittings for gas piping on-site.

Dynamic Homes will continue to use PureFlow PEX in future modular construction projects, Cossette said. “Every builder knows how important it is to save time and avoid delays. PureFlow lets us work fast while still delivering absolute reliability.”

END_OF_DOCUMENT_TOKEN_TO_BE_REPLACED

Why You Should Choose Viega

END_OF_DOCUMENT_TOKEN_TO_BE_REPLACED

What You Should Know About Installing Hybrid Water Distribution Systems